Visit the historic Olèrdola Castle with it’s permanent exhibition, on this magnificent archaeological site, with remains from prehistory to the Middle Ages. It reminds us of a time when Olèrdola was an important strategic location.

There is guided tours and educational activities. The Centre offers an interpretation from prehistoric to medieval times.

There are graves chiselled out of rock, in an acient berial ground and other historic buildings.

The Historic Olèrdola is the hill of San Miguel (358 m), a spur of the Garraf, south of the town.

The oldest archaeological findings correspond to the beginning of boroze age (2000-1800 BC) and later a town with a defensive walls (VIII AC-VII). The Iberians, the Cossetans Tribe also settled in the mountains, taking advantage of the existing wall and defenses partially cut in the rock (IV-V centuries BC).

Towards the end of the second century BC, the Romans established a military camp to controlthe area (Augusta), across the region. Raised an impressive wall in front of the former, with quadrangular towers. From this period dates the large cistern dug into the rock, and the lookout tower located at the highest point of the enclosure.

They erected a castle and also a church dedicated to St. Michael, in Romanesque style. Then the Romanesque church built in the late tenth century (in 992).

The castle was built near the Roman watchtower,. The Romanesque church, located in the upper half of the platform is a single nave, with apse and rectangular barrel vault. At the beginning of the century they reinforced the walls of the nave with arches and formers.

Excavated in 1963 by the Provincial Council of Barcelona and later in 1971. AS well as openethe the grounds of the Castle & Museum of Olèrdola. In 1995 taken over by the Government of Catalonia, and since then, th eMuseum of Catalonia . In 1999 a new center was inaugurated, replacing the old museum.

Roman cistern in the castle Olèrolda

Since prehistoric times and later, Iberians, Romans and Christians, have been occupying the rocky platform of the hill of San Miguel, and their immediate environment

Taking advantage of the strategic location of the site on the Penedès plain by using the natural defense offered by the cliffs. This ha led to Olèrdola being  included in the Inventory of Cultural Heritage .

With an area of 409 acres and located between the Eagle and the Puig de Villefranche stream, the Olèrdola District Park is divided into three main areas: the archaeological, agricultural and the scenic.

As a harmonious relationship between human activity, the fauna , the physical environment and landscape.

The park is part of the Natural Areas Network, managed by the Barcelona Provincial Council, which was acquired in 1988, thay year they approved a plan to protect the area and give proper treatment to the heritage of the archaeological and architectural environment.

Olèrdola is a good place to enjoy contact with nature, enjoy the beauty of open spaces: woods, bowls, caves, springs and picturesque views it offers a very rugged territory, the eastern part of the municipal boundary with Garraf, and very distinct from the winemaking plains near Vilafranca.

You can also take a trip to the caves of the municipality: Fontanilles cave, caves Ximet Can, Can Ximet abyss, the abyss Rabbit, or the cave of the source of almond. 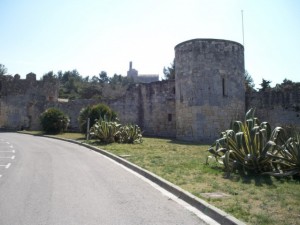 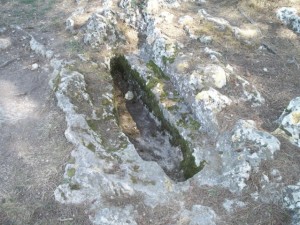 Visit the historic Olèrdola Castle with it’s permanent exhibition, on this magnificent archaeological site, with remains from prehistory to the Middle Ages. It reminds us of a time when Olèrdola was an important strategic location.

There is guided tours and educational activities. The Centre offers an interpretation from prehistoric to medieval times.

The mountain has been a strategic Olèrdola site and successively inhabited by man since the Bronze Age (more than 4,000 years ago) to medieval (thirteenth-twelfth century).

The first fortified village dating from the early Iron Age (BC s.VIII-VII). Between the SV-IV BC, was occupied by Olèrdola Cessetani, one of the Iberians. Between early and late s.II following century, the Romans chose the mountain to set up a military camp in order to control the territory, especially the way they crossed the plains Penedès. The Iberians were olerdolans to assimilate the new customs and lived together over half a century the Roman garrison. As a testimony of the Roman legacy, remain in Olèrdola three works: the wall, the tank and the watchtower.

A thousand years later, in time altomedieval, the fortified area was again inhabited, building defenses and its strategic location. Olèrdola was founded in 929 by Sunyer, Count of Barcelona, ​​county property and remained throughout the period.

Throughout, in the context of struggles between Christians and Muslims, the castrum Olèrdola had a prominent role in the control and defense of South Brand. In the early twelfth century, with the displacement of the border towards the Christian south and the pacification of the region, Penedès, the decline began Olèrdola and the gradual shift of population towards the plain, near the fields , water and roads.

Within the fortified medieval space divided into three areas. At the top was the military zone, with the castle at the top and, below, the sacred area, the church and the cemetery. The bottom of the hill was occupied by houses. The civitas extend outside the walls, on platforms and rocky valleys nearby, the place being known Albats of the Plan.

Inventory of archaeological sites known as BIC and unskilled

Context: Farming / wasteland. Fields with various crops (grapes, potatoes, etc..) And part of woodland and scrub, on the south side of the farm of San Miguel, 800 m. southwest of the town of San Miguel Olèrdola. Top of the ridge overlooking the valley to the south.

Context: wasteland. Limestone wall that stood on the right bank of the stream Segueró. The open cavity facing the cemetery of La Plana Round, the North-East and the cliffs above the left side of the Torrent de la Rovira.

Context: wasteland. Slope limestone cave located on the left bank of the stream Rovira, under the Round Plain Cemetery, South. It is a very eroded karst relief without significant vegetation on the slopes (kermes oak) and pines, oaks and fields of wheat and vineyards depths on either side of the river.

Context: wasteland. On the south side of the Segueró depths, 70 m. Within the confluence with the way the source Fontanilles (old road to the castle), completely covered by vegetation of vines and lianas in oak. It is very difficult to locate because it seems more a part of the Triassic basalt, without being able to see any incoming or sediment accumulated within 10 meters. It is a site to be linked with other final stretch of the depths of Segueró.

Source of coats of Almond

Context: wasteland. Set of shelters located in the Nor-Eesti Can Ximet farmhouse in the depths of the north cliff Segueró in a space of about 100 meters long, between that farm and the source of almond. Calcareous substratum and surrounding vegetation of oak, pine, brambles and other scrub.

Context: wasteland. Elements and structures of this group are located around the source of almonds, half sorgència located North side of the cliff bottoms of Segueró under the southwest end of the plains, rocks and agricultural land vineyard located on the cliff. Landscape of limestone substrate with dense forest (oak and pine) and brambles.

Neck of the Eagle

View Larger Map
Olèrdola castle controlled the area of the Penedès Depression in the Early Middle Ages, reaching the height of its significance when its castle dominated the region under the control of the rebellious Mir Geribert, “Prince of Olèrdola”. Its importance declined from the twelfth century and its administrative role was taken by Vilafranca del Penedès.