A wild, colorful and noisy ‘Mardi Gra’ type carnival.
With over 300,000 party goers, at it’s height.

Often over 40 floats filled with beautiful people, young and old, of every persuasion,  scantily dressed in colourful, wild and fun costumes. Parading around the streets of Sitges. Most Sitgeans and visitors dress up in crazy and fun costumes to dance and party through the night.

Regarded by many, as one of Europe’s safest, wildest, street carnival.

Though rumbustious, the atmosphere is amazing with many people in fancy dress. Allowing the police to concentrate on marshaling the parade, which is behind a safety fence.   Beauties male, female, young and old wear inventive, colourful and sometime skimpy outfits. Whilst the drumming bands keep the crowd and dancers active well into the morning.

And many stay out right through to after dawn

Feast & King of the Carnestoltes arrival at the Miramar Building (17:00). 300,000 fun seekers, many in costume, dancing and watching the parade on Sitges Promenade and town center streets. Election of the Queen & often, the Children’s Carnival. Her Majesty, the Carnival Queen and entourage visit schools and institutions in the town

Often, children in fancy dress & costumes also take to the streets on the same day, but in the afternoon.

The arrival of Carnival

During the carnival will be governed by the town Sitges Carnival, King of silly, with the presence and collaboration of the Queen of Carnival to spread an atmosphere of revelry and debauchery in the dozens of social and cultural xatonadas celebrating in different institutions of the town, and the streets with thousands of costumes that can be observed, reaching its most important time to debauchery and parades of extermination.

Mardi Gras takes place for the arrival of Her Majesty the Queen in the company of Carnival Carnival. Once, His Majesty and his entourage head for where the City took possession of the City and go to all the villagers and townspeople Predicot reading. Popular take place that night xatonadas El Retiro, the Prado or the Association of dances. Friday, Carnival Majesty, the Queen and her entourage visiting schools and institutions of the town. Saturday still these visits and evenings tend to have street music and children’s activities.

To participate you need a bed on wheels, imagination, at least five people dressed and most importantly, eager to enjoy themselves and have fun. As usual the starting signal will be given by the Queen of Carnival 2013 together with Reina Infantil, 12 hours before the February 9 Entity Casino Prado Suburense Gumà Francis Street. Following a tour main streets of the town and to avoid some obstacles is the arrival in the Plaza de España. Participants of Honor and the race will be close Majesty Carnival with his entourage. Meeting point will Gumà Francis Street from 10.30 am to validate the contestants and organizers do the delivery numbers. Will Trophies for 1st, 2nd and 3rd placed special classification speed, the best bed, best group costume and more fun. Bases

Each bed will take a minimum of five people, one of which must be on the bed with a pillow and a helmet for safety reasons.
All team members will be in costume, and they will be the only allowable traction to push the bed.
Numbers will be given strict order of arrival at the inspection and will be the starting order.
Participants Minors must present an authorization from their parents to submit the registration.
The organization has the ability to carry out inspections teams to avoid “dopatges” purchases and potential jurors (baskets, hams, travel, envelopes …)
Route

Casino Prado, Francisco Gumà Jesus, Cape Town, Saint Paul, Paseo de la Ribera, Bonaire, St. Joseph, Espalter, up to Plaza de España. Registrations Registrations can be made at the offices of the Casino Prado (Tel.93 894 31 10) to the phone. 661 839 506. Registration fee: 15 euros per team / bed. Classification 2012 The winners were as follows:

Sunday is a key day in Sitges Carnival, takes place the Debauchery Parade, parade of floats and about fifty more than 3,500 costumed participants with a tour around the town center and back takes place Tuesday Parade Extermination with the same route and with a greater number of visitors coming to this party posses. Children also take to the streets dressed in the streets of Sitges on the same days but in the afternoon.

The Burial of Carnival

Carnival ends on Wednesday, Burial of Carnival takes place and the locals can accompany him and his entourage to the place where they buried him come to the reading of his will.

Panxampla, the group responsible for the organization of the main characters of the Carnival, Carnival Majesty, designed the poster and the program’s Carnival 2013.

The poster shows the spirit of a cowboy boot, inside of which you can find the dates for the Sitges Carnival. The font used also refers to the old westerns. In addition there are direct references to the game of poker, All in the expression, used in games when a player bets all his capital in one hand.

Panxampla’s completed work with other posters that hang in the streets of Sitges days before the start of Carnival. These posters will be a silhouette under appeal Wanted emerged as the Majesty Carnival, according to hints Panxampla’s must discover who is behind this dark silhouette.

In addition, we have also prepared other images and elements that decorate the streets of Sitges and gradually discover as we approach the celebration. Carnival 2013 The program shows a sober design, also inspired by westerns, and some surprises which will be announced soon. Posters from other years:

His Majesty Carnival in Sitges this comes from the hand of Panxampla 2013’s. The group was founded in 2002 and in that time has always participated in the Carnival Casino Prado integrated entity Suburense. Despite its history, the group had yet to organize an ever enthusiastic character. Street Carnival will bring 74 people to accompany the King of silly.

For now, advance that could Panxampla’s “mystery and humor will relive the darkness set in a village far west.”

The group wanted to “nobody miss a moment of this carnival get a time where there is pestanyejar a predicot where one can yawn, guided where nobody stop laughing, some parades where everyone wants to participate, and burial where no one will cry. ” (Soon we will offer more information and photos) 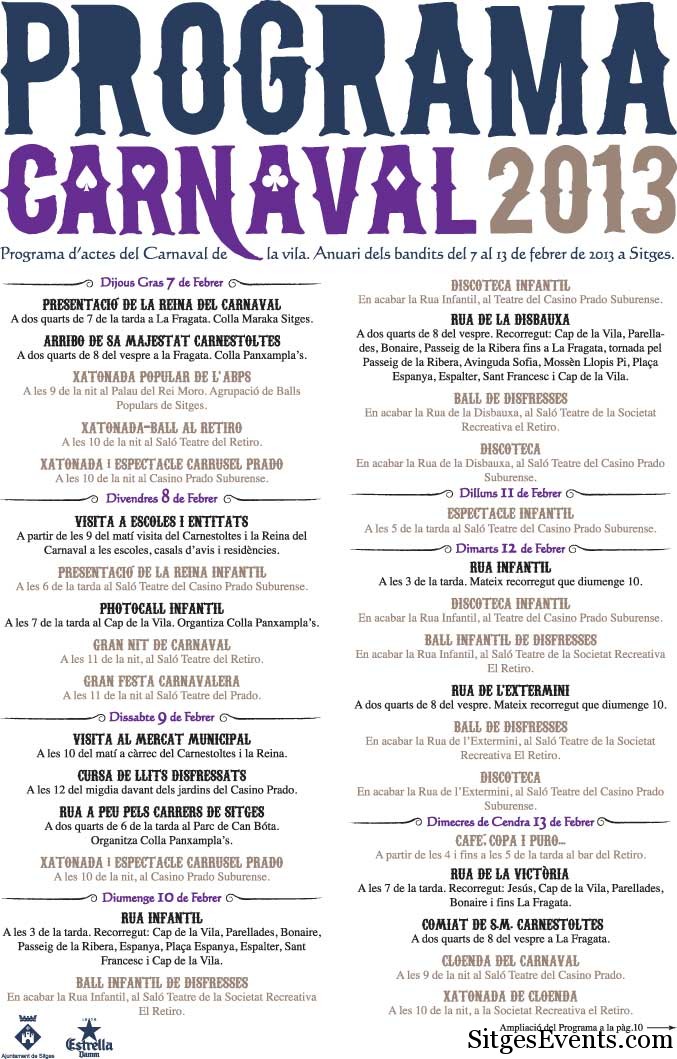